In the landscape of popular music, there is a small minority who are listening to indie rock, smaller who are listening to the critically acclaimed band, The National, and smaller still who know that the lead singer, Matt Berninger, has a metal head younger brother. In fact, the only people who may know or care about Tom Berninger are his parents. It isn’t easy to see your older brother become one of the most celebrated musicians of the 2000’s while you toil away, living in your family’s basement.  So sets the scene for the film , Mistaken For Strangers, taken from the name of a song off The National’s fourth album, Boxer.

“I feel like the only reason why he thinks I’m on tour is because I’m your brother.

“Here’s the truth.  The only reason that you are here is because you’re my brother”

Filmed in 2010, while the band was on tour in Europe, Strangers outlines the tension of the family golden boy vs the underachiever, in a clear, but subtle way.  Matt was tall and athletic growing up (though I thoroughly enjoyed seeing Matt Berninger’s awkward teenage brace-face).   Tom was short and had a belly.  In an interview with their mother Nancy who is a painter, she shows us two paintings that she uses for inspiration.  One is a modern, abstract painting, clean lines and very sophisticated – Matt’s creation.  Then next to it is three panels of drawings, cartoonish figures (akin to something you would see on Adult Swim) that tells the story of a man who wants to make his own legs – Tom’s. God bless Nancy, who reminds her son, “I always told you, you were my most creative.  My most talented.  Matt was harder to raise. He was always moody growing up. But you were happy, you just took things as they came.” To which Tom says, “Until now, now I’m the depressed one.”

“You were the weird, artsy kid.  And he was like the goldenboy, like the quaterback” – Bryce Dessner 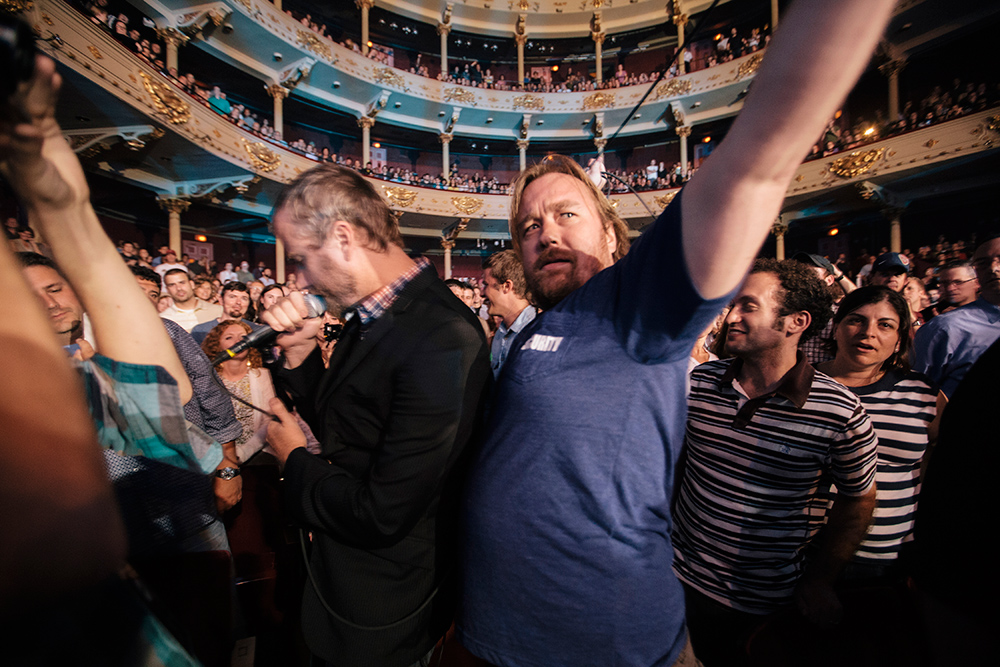 Matt Berninger performing a sold out show, Tom Berninger following behind with the cord to his microphone

The National is a band made of brothers; Bryan and Scott Devendorf, and Bryce and Aaron Dessner, who are twins.  Matt Berninger is the only one without a sibling in the band, but in an attempt to give his brother a break, hires him to work as a roadie and film for his documentary.  The resulting film is about 65 minutes of the most cringe worthy, awkward, and funniest footage I have ever seen.  In particular the scenes where it seems like Tom is still the annoying little brother, or making those around him uncomfortable with his prodding.  In one scene Tom directs Aaron Dessner, look away from the camera, now look over and say, “I’ve got a great idea” “-I’ve got a great idea!”  Or asks Bryan Devendorf, who he “knows” is a little more metal than coffee house, unlike the rest of the guys, “how many, and uh, what kind of drugs have you used.” Cut to the two of them drunkenly singing and dancing on the back of the tour bus.

Berninger, a Jack Black type, a- la School of Rock,  often laments that there wasn’t any hanky panky going on on the tour bus.  But the truth is that it no longer seems appropriate to think that five adult musicians are going to be all throttle and hilt.  Today successful Indie bands  are appreciative of their success and know that they need to tour like grown ups.  As Bryce puts it, They are people who gave up regular jobs and now are rock stars working very hard to keep the business afloat.  It reminds me of the 2012, Vulture feature on the band Grizzly Bear, (which is great in its entirety) where Nitsuh Abebe writes that,

Sit down with the four of them, and you get the overall sense that the band’s high profile has taken them from ordinary early-twenties NYU grads—working as a temp, a caterer, a coffee-shop employee, and “the guy who edits out the coughs” in audio documentaries—to the early-thirties proprietors of a risky small business: very busy, stuck somewhere between “scraping by” and “comfortable enough,” and unsure how they’d ever manage to do things like support families or pay for any children’s educations, especially given the slim chances that this business will exist twenty or even ten years from now.

According to Abebe, the mood on a Grizzly Bear video shoot could best be described as uncomfortably tense. 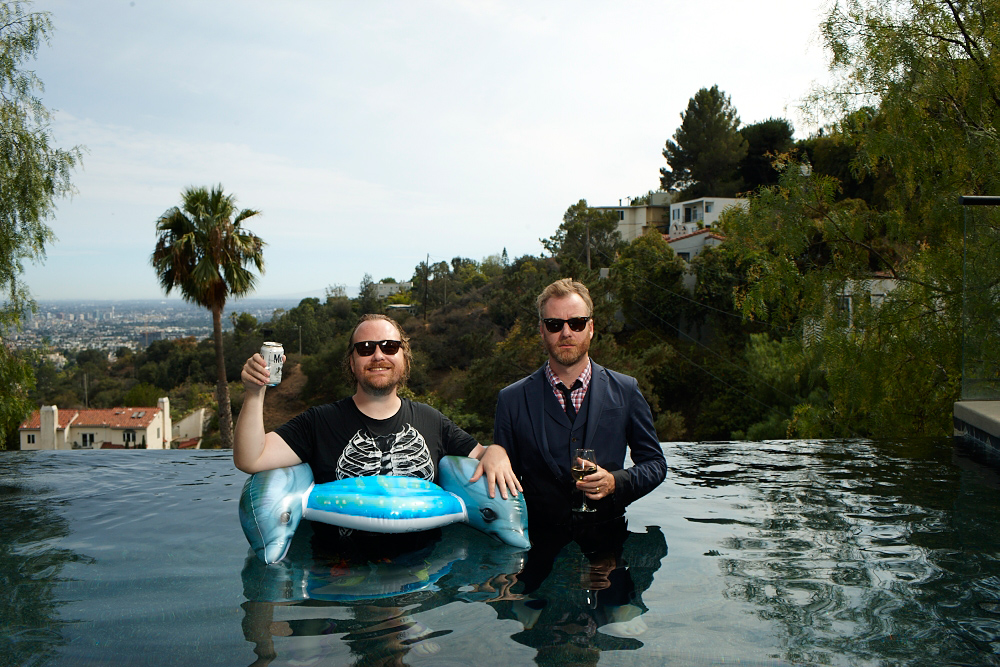 Matt’s got it easy. Matt’s got millions of people reminding him how brilliant he is every night. – Aaron Dessner

How organically the story came together is questionable.  There are typical moments in a narrative of this kind, Tom wants to drink all the time (or “has the allergy”), the tour manager, Brandon, is tightly wound and rides Tom’s tail for being unprofessional, Tom gets fired from the tour and misses the tour bus out of New York because he had been left behind at a bar. Naturally, there is the pinnacle moment where he must re-examine his life and decides that he will finish the film because as his mother puts it, “You were always quitting things.”  To me some of the moments seemed a little staged or false.  Especially considering how he allowed Aaron and Bryce Dessner to hang for talking poorly about Matt on camera.  Capturing how the two seemed to relish any moment that someone would let them speak out freely.  Their anger never really gets resolved in the same way that the brothers’ relationship is mended. However, these moments of pause don’t make the story unenjoyable and are perhaps the marker of a skilled filmmaker rather than someone manufacturing moments of sap.  The story was endearing, heartfelt, had me laughing, and told it with an even hand.  I wasn’t familiar with much of the The National’s music before the movie, but ultimately everyone came off as supportive, likeable, and just trying to manage Matt’s success as well as they can.  And for that, they are worth at least a search on Spotify.

The two anchors for Tom’s personal growth (and because he becomes a filmmaker in the end could we call this a Kunstlerroman?)  is best summed up by his brother. Here I paraphrase,

“You do so many things wrong that everybody else can get right, but the things you do well, nobody else can do.”

And in my head I add, “that’s what makes you special.”